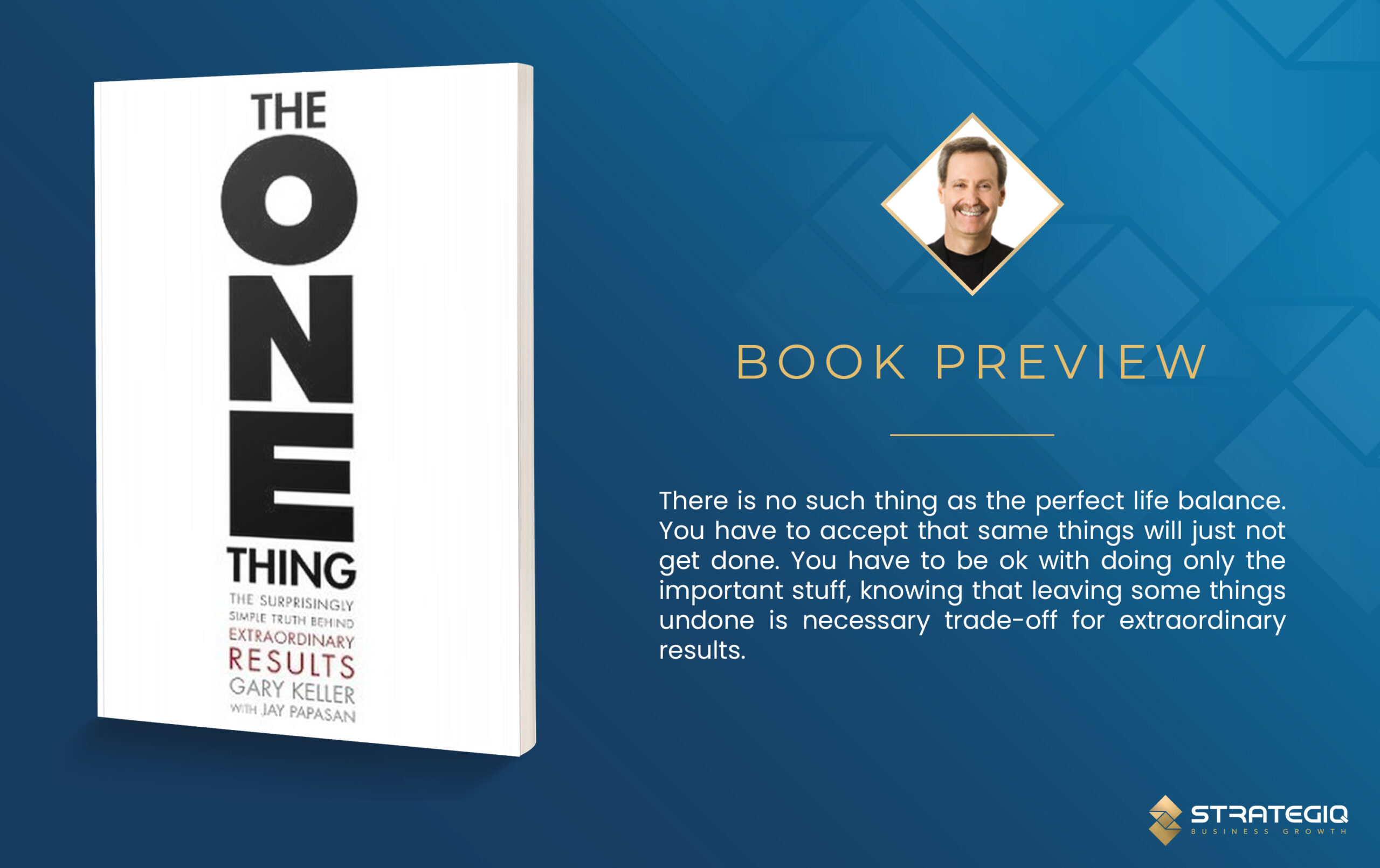 This Wall Street Journal best seller claims that you can have less and more at the same time.

The central message is to focus solely on the one most important element of your situation, and be subsequently rewarded with everything you want.

Trying to tackle too much at once will only lead to unnecessary stress, and the probability of an unfavourable outcome.

‘If you chase two rabbits – you will not catch either one’.
So says the Russian proverb.

At the heart of the author’s theory is the realisation that you need to:

Tune out all the white noise, and zoom your focus in as far as you can. Pinpoint the most effective component that will have a direct impact on your circumstance. Deal with this one small factor only.

By trying to think too big and take on too much – you end up accomplishing too little. Unfortunately, many people seeking to achieve greatness share the mindset that taking on everything is equated with success.

Ultimately though, these high achievers become overwhelmed and disillusioned, and invariably give up on their dreams.

Keller sums it up perfectly …

“You need to be doing fewer things for more effect, instead of doing more things with side effects”.

By choosing the one thing, you can expect to encounter: 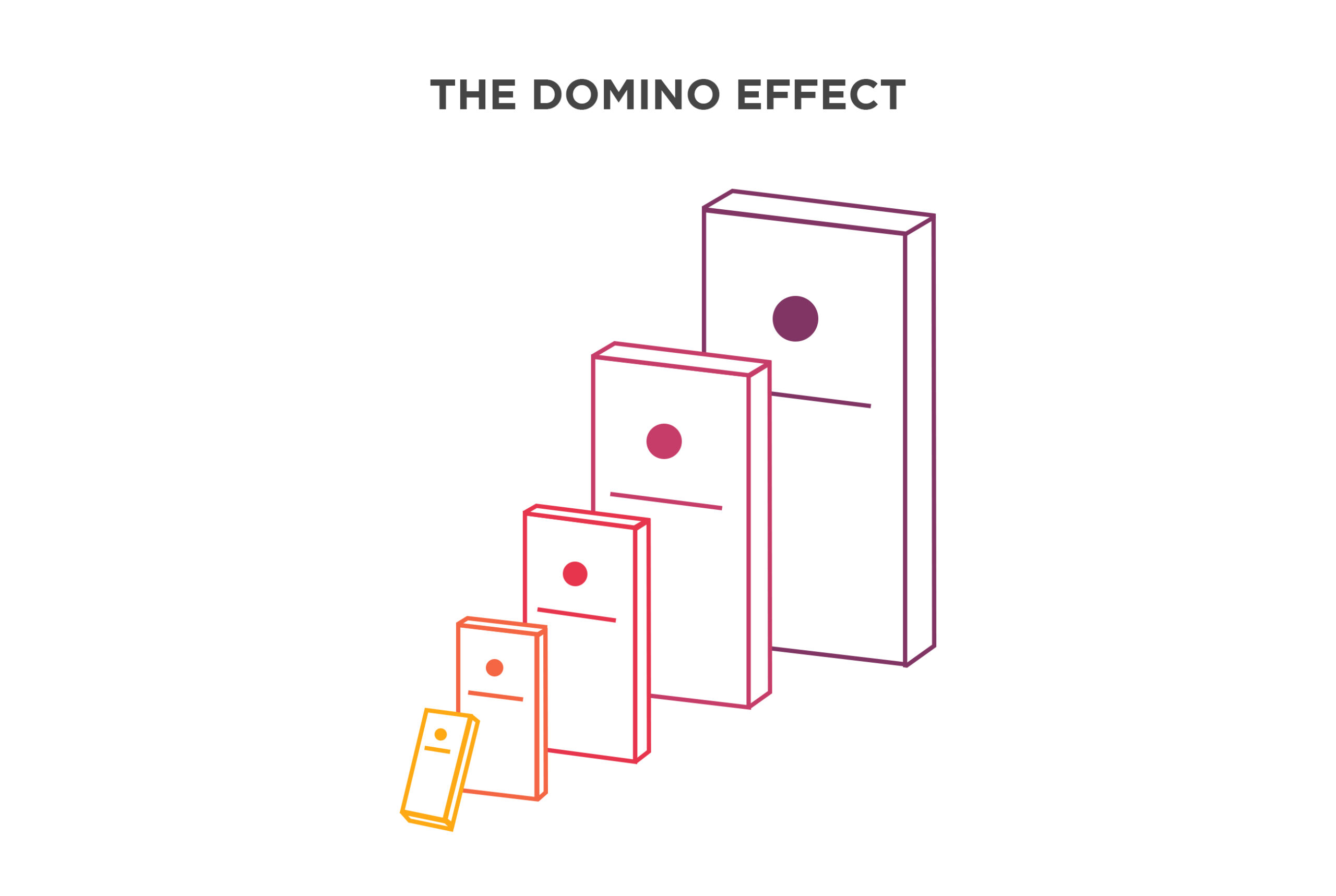 The toppling of a single domino can create a force powerful enough to move a domino 1½ times its size.

If you were to line up a sequence of incrementally larger domino tiles, the train of movement from the fall of the first tile would progressively pick up speed and momentum until the last and most sizeable tile comes slamming down.

The energy generated from knocking down one small tile quickly escalates into a dynamic power source.

Likewise, by attending to the one most important thing in your scenario – that first domino, a force is created that has significant impact on all other aspects.

On a daily basis, you are urged to line up your ‘dominos’ … your priorities, find the lead tile, and give it a whack. Then witness the knock-on effect.

This theory can be applied to anything from huge-scale business affairs, right down to every day decisions.

Success builds on success. It is built sequentially – one thing at a time.

It keeps coming back to:

The power of one

Sometimes the power of one presents itself as a task, sometimes as a person, sometimes as a great skill or passion. But in each instance, it all comes back to that one major piece of the puzzle.

Most success stories will revolve around a core ingredient. There are many important things, but only one can be the most important.

The one thing that drives the outcome. The one person who makes the difference. The one talent that shines through.

When you have that starting point, all else will fall into place. 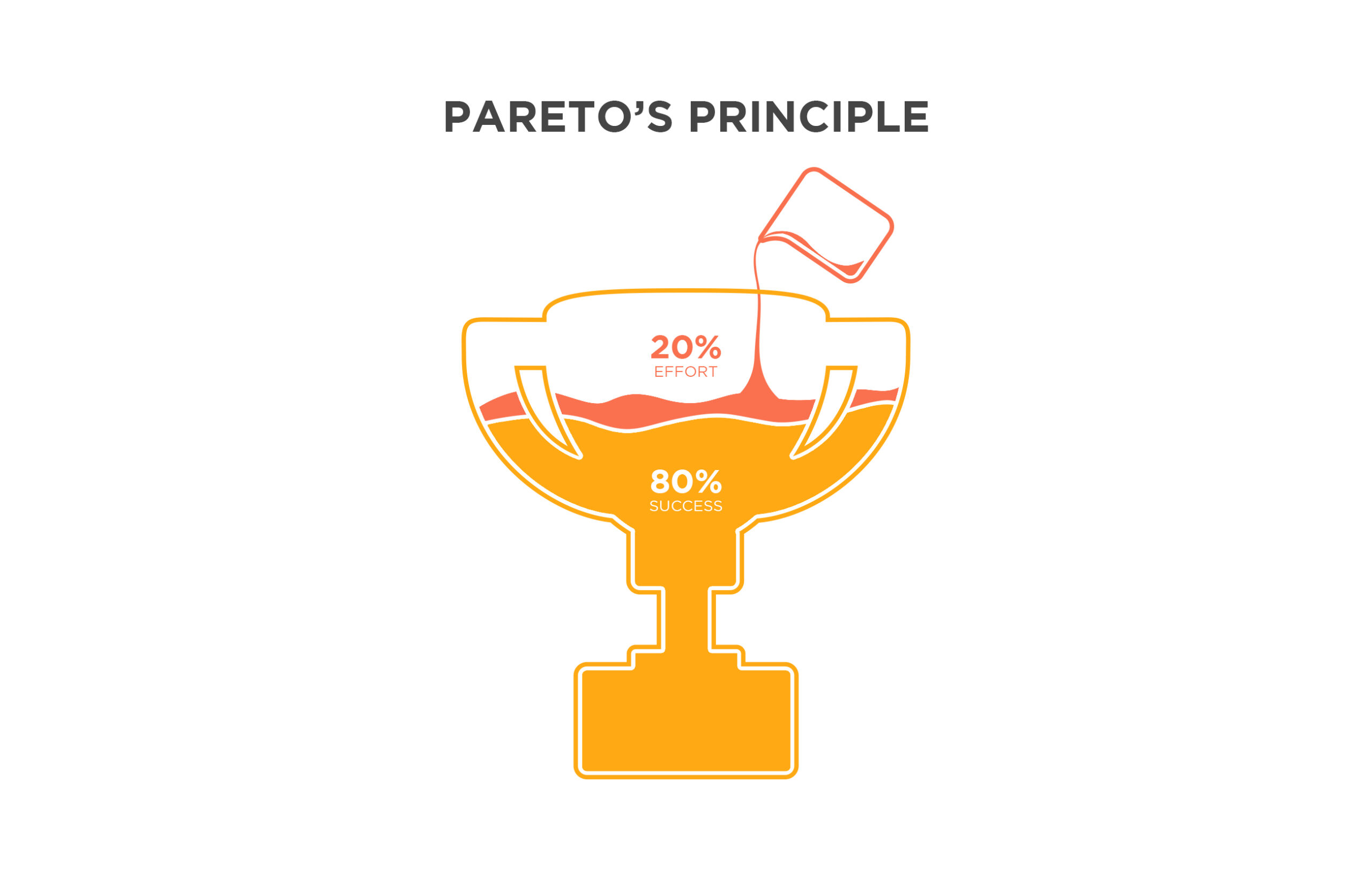 Also known as the 80/20 Principle, this theory dictates that:

A minority of causes, inputs, or effort usually lead to a majority of the results, outputs, or rewards.

This formula, devised by General Motors executive Vilfredo Pareto, is a proven universal law as real as the law of gravity.

It has been tried and tested time and again, each time leading to success.

Multi-tasking is the opposite of focusing on one thing – and it is futile.

You are able to process different kinds of data in different parts of your brain.

By attempting to do two things at once, you have separated them into two channels. You are able to do them, but you can’t focus effectively on both activities at the same time.

It’s like having the t.v. and the radio on in the same room. You can’t fully concentrate on one with the other blaring alongside.

Physical actions like breathing and swallowing are automated by a specific part of the brain. They are unconscious, involuntary functions. They do not require focus. We can do them without thinking.

But the prefrontal cortex is where all the calculated action takes place. If you try to focus on two deliberate things at once, your attention gets divided. Both actions become compromised.

Take on a third thing, and you’re likely to drop the ball.

So, now you’re ready to proceed, but …

Where do you start?

Mark Twain is quoted as saying:
The secret of getting ahead is getting started. The secret to getting started is breaking your complex overwhelming tasks into smaller manageable tasks and then starting on the first one.

But how do you recognise what comes first?

But Keller implores you to ask The Focusing Question – What’s the ONE thing I can do such that by doing it everything else will be easier or unnecessary?

It helps you see the bigger picture, as well as the smallest move you could be making right now.

Separate it into 2 questions:

The Big-Picture Question – What’s my ONE thing?

This is to find your overall vision and direction.

The Small-Focus Question – What’s my ONE thing right now?

This helps you find your first ‘domino’.

The Focusing Question is the most powerful success habit you can have. You can ask it in relation to any area of your life.

Overall, the wisdom contained in these findings encourages you to:

Work it backwards and your actions are determined by what you have prioritised. What you choose to prioritise drives your life’s purpose.

You can change your life’s purpose at any stage of the game – by changing your priorities.

A life lived on purpose is the most powerful of all – and the happiest.

Keller explains how to prioritise, time block, and seek support. He teaches you how to be accountable for your actions, and how to recognise and overcome the obstacles in your way.

And when all is said and done, here is the biggest take away:

Don’t gamble with your time. Don’t waste it on the trivial and unimportant. Don’t be fooled into thinking you have to take on everything to the detriment of that which really matters.

Don’t fall into the trap of believing that someday you’ll have time. That someday all the heartache and stress will pay off and you can finally enjoy life.

There is no such thing as the perfect life balance. You have to accept that some things will just not get done. You have to be ok with just doing the important stuff, knowing that leaving some things undone is a necessary trade-off for extraordinary results.

Rather than trying to find balance, try to simply prioritise.

Fill your life only with the things of great personal significance.

And most of all – have no regrets. 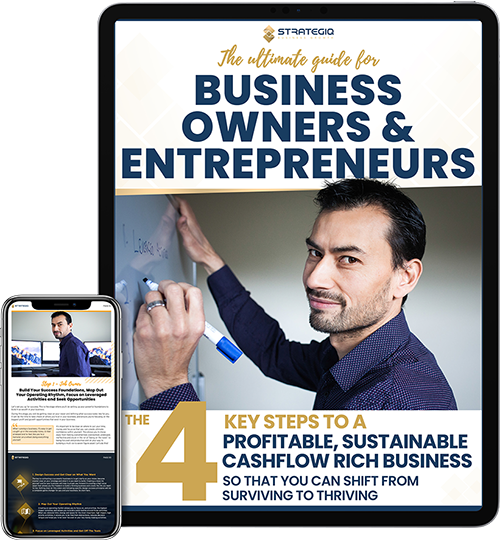